Gramophone Magazine has written "Benjamin Grosvenor may well be the most remarkable young pianist of our time. " He first came to prominence at the age of eleven as the winner of the Keyboard Final of the 2004 BBC Young Musician Competition. This past summer,  he was the cover story on BBC Music Magazine: "Britain's greatest young pianist." 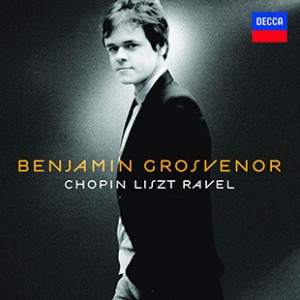 On January 17, we will have the opportunity to experience first-hand the artistry of this international sensation. Benjamin Grosvenor will interpret the works of Chopin and Liszt, two of the greatest romantic piano composers.

On his earliest recordings, there is already " the kind of clean, transparent authenticity that wizened Chopin specialists rarely manage."    Mr. Grosvenor comes from modest beginnings on the southeast coast of England, which makes his meteoric rise all the more unusual.  Born in 1992, he is the youngest of five brothers. His first public performance took place in a fish and chips restaurant .

Our  alumni connection, Julian Kreeger, is a 1961 graduate of Columbia College where he produced music programs for the college radio station. He used this position, along with an  outgoing and enterprising nature, to gain access to many of the outstanding musicians of the day. When family circumstances forced a move from New York to Miami, Julian Kreeger became a local impressario. He worked his network of deep friendships forged in New York to draw world-class artists to Miami, sometimes putting them up in his own home.   Mr Kreeger, a graduate of  University of Miami Law, also built a highly-rated entertainment law practice here. Since January 1986 he has served as President of the Friends of Chamber Music in Miami . With this concert we celebrate Mr Kreeger's 30th anniversary with FOCM as a key promoter and supporter of quality music in South Florida, and recognize his contributions as a distinguished Columbia alumnus.

Tickets are $40 per person. We have a limited number of reserved seats. Price includes a private buffet reception after the concert.

Sorry, this event is sold out.
music