February 5 is our special Alumni Night at the Colony Theater - experience the original smash hit musical, "The Golem of Havana" 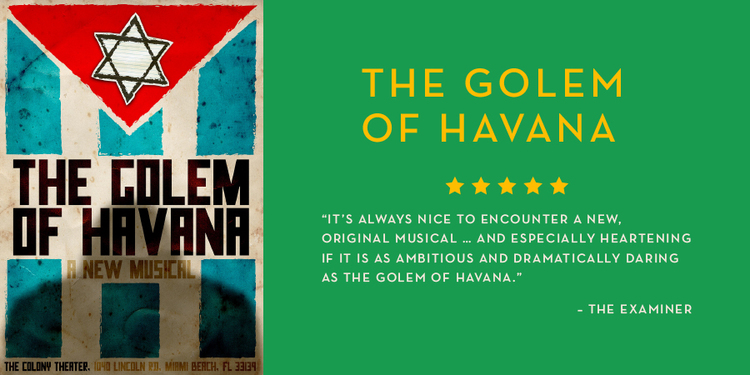 With Book & Direction by Michel Hausmann (Columbia School of the Arts MFA 2013), Music by Salomon Lerner,  and Lyrics by Len Schiff, The Golem of Havana tells the story of a Hungarian-Jewish family living in Batista's Havana on the brink of the Cuban Revolution. This exciting musical blends Cuban, Latin Jazz and Klezmer music to highlight an epic tale with roots that reach all the way back to World War II.  The Golem of Havana has enjoyed sold-out productions Off-Broadway at La MaMa and in the Berkshires at Barrington Stage Company. The musical was also a Richard Rodgers Award finalist for New Musical Theatre and an Independent Reviews of New England Award (IRNE) nominee for best play.

"The Golem of Havana is funny, smart and absolutely gorgeous. Hausmann takes apart the histories of two different traumatic events and brings the issues of right vs. wrong, family vs. country, us vs. them musically to the stage, creating a truly multicultural, multilingual and very worthwhile theatrical experience."

Michel Hausmann recently relocated to Miami to open the theater company Miami New Drama with Two time Tony and Emmy Nominee Moises Kaufman.  We'll have a chance to meet members of the creative team and the  cast, a mix of New York and local artists.  In fact this show was first developed in the hallways of Columbia. See the play, and stay for the fascinating backstory --