Here's quick update on a local alumna of note, Daniella Levine Cava.  As a political newcomer, she managed to handily win the hotly contested race for Miami-Dade County Commissioner in District 8. This was only the third time in the past 20 years that anyone had defeated an incumbent commissioner (and the only time after one term). Commissioner-Elect Cava was kind enough to entertain a few questions this week for the Columbia Club of South Florida. She will officially take office on November 18. 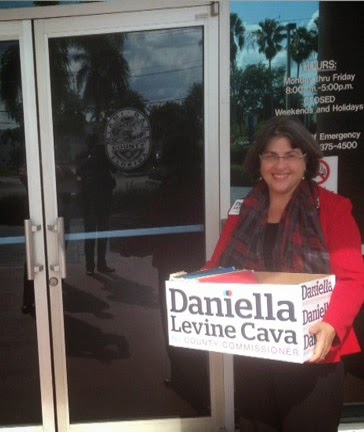 Miamians know Daniella Levine Cava best as an advocate for social issues, including the founding of Catalyst Miami. As Miami-Dade Commissioner-Elect, your influence now extends to so many other spheres. For example, your district is intimately connected to Biscayne Bay, the Everglades, and to South Dade farmlands. Do you envision a role for yourself as an environmental steward for South Florida?

Our beautiful environment is in peril, and Miami's future health and economy depend upon a series of critical decisions. I am eager to serve as a steward of our natural resources as well as our human resources. Miami-Dade has signed on to a regional climate compact and specific recommendations will soon be coming to the Commission for a vote. We must not only endorse but also develop specific action plans for implementation, challenging our status quo approach of develop first and consider impact later. Our farming community is a key component: not only does it serve as a rare producer of winter crops and economic engine for the county (second highest sector after tourism), it also serves as a buffer for our watershed, the underground aquifer and Everglades water flow.

Some recent Columbia and Barnard grads have moved home to South Florida while they seek employment.  Other alumni have still not regained posts that they lost in the 2008 downturn.    What is your current view of the job situation in South Florida? What is your very best advice for job seekers?

Miami-Dade lacks an adequate job market to support talent retention for good jobs in the new economy. Yet, Miami has become a destination of choice for many young adults, and we owe it to them and to our community to maximize opportunities for them. Support for entrepreneurship has grown (thanks in large part to efforts of the Knight Foundation, building on our naturally entrepreneurial culture) and civic leadership has invested in coordinated approaches to internships and leadership development. Civic engagement fuels attachment to place and we can do much more to tap the optimism and enthusiasm of millenials, growing pathways for commitment to Miami and its future. I advise job seekers to dig in, discover their passions, and create the future for themselves. I have seen this work for many, who are patient, persistent and adaptive.

You received graduate degrees in law and social work from Columbia University. What are your most vivid memories of that time?  Are there ways that your years at Columbia prepared you for your current responsibilities?

I am so fortunate to have received outstanding education and career preparation at Columbia. The theory I learned in law and social work was practiced in numerous internships and summer jobs in multiple cities. New York City was a laboratory for innovation and inclusion, just like Miami, and provided me with a firm foundation to tackle the paradoxes of Miami's culture and economy. I designed a unique joint degree program that has been foundational for my social change work and now for my successful run for elected office.